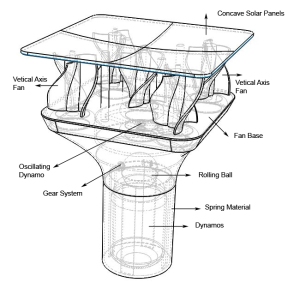 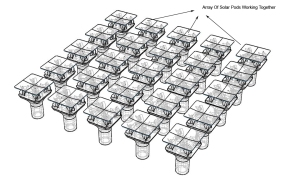 Let me introduce to you ePods, my latest patent. These electro pods are three times more efficient than any solar panels out there. ePods work with wind, solar and dynamos in motion. All it requires is 15 mph wind speed for these pods to fully function and become three times more efficient (60%) or four times with the wind speed of 20+ mph, and they also work during the nights, unlike your standard solar panel.

They work as regular solar panels when it’s sunny and with a combination of wind speeds of at least 15 mph, they work on three levels of electrical charge generation that includes; four vertical axis wind fans, oscillating dynamos, and a ball-gear system that rotates a powerful dynamo with movements caused by the wind.

I am currently working on six patents  for solar farms and for individual homes in regions such as Africa and South Asia where the bulk of people live without power.

The IAE estimates that earth’s population will top 8 billion by 2030 and 1.3 billion people will still live without electricity. Of those 700 million will be in Africa and 490 million in South Asia that do not have power and depend on alternative power sources such as kerosene lamps. Innovative solutions and adequate funding from various governments and NGO’s around is required urgently to provide these people with the basics.

Since ePods require less space than regular solar panels, the estimated cost to power an average home in Africa and South Asia would be approximately $1.20 per watt. That is the lowest in the industry.

E.g.: 100 square feet of ePods (8 pods) can generate up to 5000 Wp (enough to power a home in North America) provided the average wind speed is about 15 mph or higher. Each ePod is equipped with its own battery and they work collectively as a power source. Which means, it can store enough power to work during the off-peak hours.

Where it all began: Photoelectric dates back to the Bacquerel family, nineteenth-century French physicist who first experimented with electrochemistry in 1839 and created a “voltaic cell” that first produced current. In the nineteenth century, numerous pioneers working with photochemistry in their laboratories discovered that light had an effect on certain solids such as selenium, creating a flow of current.

Photovoltaic: Also referred to, as “PV”, is a common term used these days instead of calling them solar panels or modules.

PV is best known as a method for generating electric power by using solar cells to convert energy from the sun into a flow of electrons. The photovoltaic effect refers to photons of light exciting electrons into a higher state of energy, allowing them to act as charge carriers for an electric current. The latest in PV technology is a combination of UV and Infrared technologies, which means, if its cloudy, the system will still be able to generate power efficiently.

Understanding efficiency: The sunlight hits the earth at a constant 1,350 watts per square meter and with the atmospheric disturbances we end up with a 1000-watt per square meter. PV can capture only a fraction of this power.

“Watt peak”, or Wp is the total output when the sun is at its max. On an average a typical home would have 3 to 7 hours of Wp. So a typical 50-Wp PV will reach that output during peak sun.

Countries with the most amount of sunlight:

PV size: The average residential panel is 41 to 61 inches wide with depth of 1.4 to 1.8 inches. Each module or panel has about 60 to 96 cells standard for residential application. The cells are about 3 to 7 inches in size depending on the manufacturer and these panels can generate anywhere from 230 to 275 watts. For example, you would need 10 panels to generate 2700 watts.

Historical Cost: 1958 at $ 286 per watt, Bell Laboratory estimated it would cost an average homeowner $1.5 million to power a home.

It’s a tremendous drop in cost in just the last few years, all the way down to a buck ($1 per watt) if PV purchased online directly from China but it does not include instillation.

A 1-megawatt PV array will light up most of the power needed for two hundred homes in North America with energy efficiency and conservation.

In North America 99% of homes that have solar instillations are tied to the grid. They feed power directly into the utility grid and so the electric meters run backwards when the sun is shining. And during the nights, since there are no batteries in the system, the power is drawn from the utility power lines.

Seamens role: Charles Fritts, an inventor sent his experimental “photoelectric plate” to Werner von Siemens who proclaimed that photoelectricity was to be of great importance.

In 1876 Siemens himself reported to the Berlin Academy of Sciences on light’s impact on selenium’s electrical conductivity. A hundred years later, it all began when Siemens, the global manufacturing giant injected millions of dollars into its subsidiary once known as Siemens Solar. Siemens exited the market in 2013 after suffering billions of dollars in losses.

Top PV manufacturers of the world :